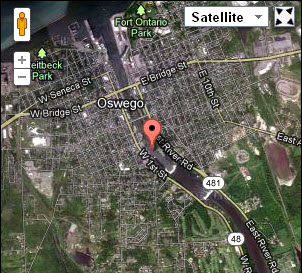 Oswego River provides the fly fishing enthusiast the opportunity to land a salmon, steelhead, brown trout and even a rainbow trout in a single stretch of river.

Running through the central part of New York State, Oswego River is one of the best fishing tributaries of Lake Ontario.  In most places the river reaches up to 500 feet in width and measures about a mile in length beginning at the dam and traveling to Lake Ontario. This stretch of water is well known to hold a variety of fish such as lake trout, pike, largemouth bass, walleye, rainbow trout, steelhead and salmon.

Since the water holds a wide variety of fishing, there are several points during the year when anglers can expect to get lucky.

Steelhead
The annual run of steelhead will start in the early part of October and last throughout the winter and into spring.  The middle of October all the way to late April marks the prime time for catching a steelhead in Oswego.  Fish in the range of 4 pounds all the way to 20 pounds have been caught in these waters.

Brown Trout
Brown trout will leave the lake and move through Oswego River starting in September.  Their run does not last as long as the steelhead.  Expect to find healthy fish from 4 pounds to 18 pounds at the peak of the run from the middle of October until the latter part of November.

Chinook and Coho Salmon
Beginning in August, the big 10+ pound Chinook salmon works their way down the Oswego.  Like the brown trout, they have a narrower window of opportunity.  Early September up until the middle of October is typically the best time for catching Chinook salmon.  During this same time, it is also possible to land a Coho salmon.

Where to Fly Fish on Oswego River

A place near the Varick Dam is the ideal spot for fly fishing.  Small pools, pockets and runs cover the river for approximately 1/4th of a mile.  This shallow area is lined predominantly with shale.  It is advised that anglers who like to wade should have on cleats to get a better footing in this part of the river.  BE WARNED:  there is a siren that alerts anglers and other nearby citizens that water is being released from the dam.  Make sure to be respectful of the warning and move out of the river during rising water.

Oswego River Flies to Use

Salmon usually like the egg patterns and estaz flies as well as woolly buggers.  Steelhead will hit a generic nymph, egg patterns, wet flies and wooly buggers.  Brown trout like the nymphs and egg patterns.  Colors range from pink and purple up to black.  For the most part, match the fly to the weather pattern; brighter days call for brighter flies, and vice versa.

If you are looking for a great place to wet a line and land your next trophy trout, steelhead or salmon, consider the Oswego River in New York State for your next fly fishing adventure.

Larry Chandler is a freelance writer for Fish Victory, a leading guide on the Oswego River.